In the Comment is Free Guardian on 15th April, David Flint, Humanists4Science Chairman has responded to Madeleine Buntings' article in the CiF Guardian section: 'God is attracting more debate than ever'. The New Atheists did not manage to dent the growth of religion across the world. Instead, they only fed our interest in it.
Bunting asks what progress have the 'New Atheists' achieved since the publication of Richard Dawkins 2006 book 'The God Delusion'. She says:

'the great mistake the atheists made is to claim that religion started out as a clumsy stab at science – trying to explain how the world worked – and is now clearly redundant. That misses the point entirely: religion is not about explaining how an earthquake or flood happens; rather it offers meanings for such events. When someone is killed in a car accident, western rationality is good at analysing how the brakes failed and the road curved, but has nothing to say about why, on that particular day, the brakes failed when it was you in the car: the sequence of random events that kill. This search for meaning is part of what drives the religious spirit.'.

David's response is in The Guardian 'Not all religious explanations of tragic events are harmless' - Instead of searching for such meanings, we humanists accept that the universe is unjust.
Leave your comments below. 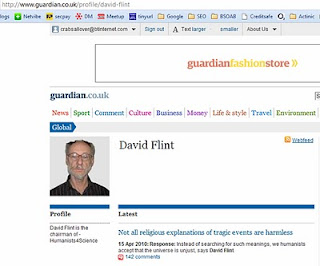