James Watt and the Making of the Modern World 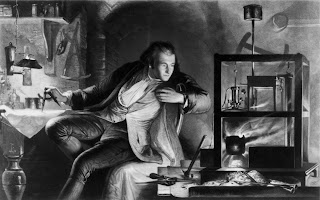 You probably know James Watt as the father of the steam engine - and perhaps as the inventor of the concept of 'horsepower'. But Watt and his inventions had a dramatic impact on society, to the extent that even in his lifetime he became a kind of semi-legendary figure.

In this rather romantic engraving, made some 40 years after his death, Watt is depicted not as an engineer and technologist (which, primarily, he was) but rather as a kind of enlightenment philosopher.

His attic workshop, preserved after his death and carefully dismantled and removed in 1924, has now been lovingly restored by the National Science Museum.

Adam Hart-Davis, of 'Local Heroes' fame, was there for the opening, and I caught up with him to ask him about the impact of Watt's inventions on society

With a bit of luck, you'll be able to hear what he had to say below:

[Sadly it's unedited, as I don't have the technology to edit .mp4 files. Call it 'edgey' and 'raw' rather than amateurish... he does go on to talk about Watt's invention of the parallel motion, but of course you won't be able to see what he's pointing at!]

I also put a similar question to Ian Blatchford, director of the National Science Museum, who had a lot of interesting things to say about not only the cultural impacts, of Watt's work, but also about what motivated him:

The thing that struck me most about the exhibition was just how far-ranging Watt's interests ranged - Flute making, pottery, chemistry, as well,of course, steam engines. His workshop is in fact dominated by two contraptions for copying sculptures - as well as piles and piles of all sorts of junk!
Posted by Epiphenom at 16:20