Americans have little doubt about the scientific evidence that smoking can cause cancer. However, many Americans still question some of the basic concepts of modern science. AP-GfK poll*

As faith in a supreme being rises, confidence in the Big Bang, climate change and the age of the Earth decline, according to the poll. 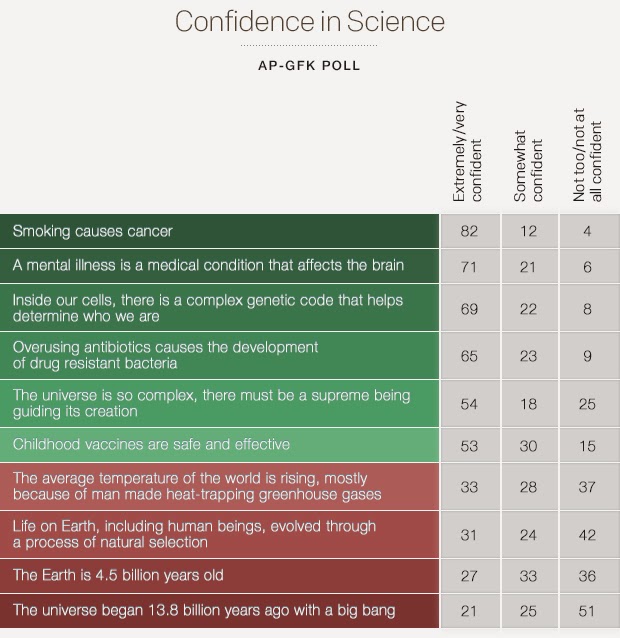 "Views on science may be tied to what people see with their own eyes. The closer an issue is to their own bodies, and the less complicated, the easier it is for people to believe." John Staudenmaier

"Science, in its really pure form, is just telling you what the state of the world is. The more in-tune with reality your beliefs are, the more you are in a position to make a wise decision. Ignorance of science could also prove to be dangerous - parents' reluctance towards vaccines can harm others by spreading disease. Science is not meant to dictate policy. Rather, it is used to tell others what the state of the world is, and how officials respond to that is a statement of values." Daniel T. Willingham

"It is enormously distressing that science, which is our most powerful means for gaining insight into the world, insight into truth, is so mistrusted by so many people. Understanding scientific ideas is not just academic, it's essential to a vital democracy. Issues like climate change or nanoscience or genetically modified foods, are scientific at their core." Brian Greene

"Some people may not believe in science because it draws on evidence that they don't experience in their everyday lives.  Everyone draws conclusions about the world around them - scientists and non-scientists alike - but non-scientists base those conclusions on much weaker evidence: a single observation, a gut feeling, hearsay from others. When those 'homespun' conclusions contradict the conclusions of science, it's difficult to recognize that they rest on much flimsier grounds." Andrew Shtulman

"Science ignorance is pervasive in our society, and these attitudes are reinforced when some of our leaders are openly antagonistic to established facts." Randy Schekman